A Tasty Tale of Caution 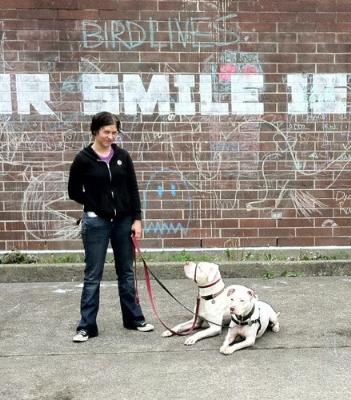 Jack was placed on NASAID (Non-steroidal anti-inflamatory drug) Rimadyl a couple weeks ago for some increasing arthritis issues he's been having. As with many medications, NASAID's aren't without side effects, but given the correct dosage, limited duration, and monitoring by a veterinarian, they're generally considered a safe drug to use to reduce inflamation and pain for issues such as spinal arthritis. I discovered this past weekend one very important fact: Rimadyl is liver flavored.

It's no secret that animals (including us!) aren't always the biggest fans of downing odd-shaped and often unplesant tasting pills, so the veterinary industry has taken a hint from human medication to make the process easier for everyone. Just like with children's medication, certain veterinary medication has been given a makeover with flavoring that dogs actually enjoy. Rimadyl is just one of the many that has been given a flavor that dogs love. Trouble is, Rimadyl overdoses, much like our human asprin and extra-strength pain relievers, can be deadly. .

Like many, I didn't even think of the possibility that this medication I was giving my dog might actually be tasty to him. I wrapped him up a nice little peanut butter pill sandwhich twice a day, and it honestly never struck me to try giving it to him just plain. He's generally the type of guy willing to try anything, but I figured medication? No way he'd take that on his own! Wrong. We have a "pet shelf" where we store empty kongs & center bones, poop bags, suppliments, meds, and just basic doggy & kitty maintenance items. It's a shelf that's easily within his reach, but in the two years that we've been at our current house he's never bothered with it and I never even thought twice about keeping his Rimadyl there. Hindsight being what it is, storing medication (or anything that can be toxic to a dog in large doses) within a dog's reach is never a good idea. .

We came home Sunday evening after being gone for just a short while to find a shreded bottle on the floor. He didn't bother with the plastic jar full of peanut butter that was left on the counter, and he didn't even finish his work-to-eat puzzle that we had left him with. He decided that bottle of Rimadyl was of much higher value than anything else the house had to offer. Luckily there were only a few pills left in there, but I knew even a small overdose could be potentially dangerous, so I decided to do a quick google search to see what I was in for. The pages that pop up when you google "Rimadyl Overdose" are enough to send any dog mom into a panic. Everything I read said "fatal", "deadly", "lethal", and several other phrases which didn't bode well. I called up ACCES (Animal Critical Care and Emergency Services) and spoke with a tech there that did advise that we get in as quickly as possible. Even with a small overdose of a handful of pills, the toxicity is enough to potentially cause gastro-intestinal ulcers and bleeding. With a greater dose and left unattended, it can lead to renal and liver failure. Not exactly something that you can just wait it out and hope it passes on through, or do as my husband initially wanted to and feed the dog and hope the food would soak the problem up. .

We headed into the vet, and after a few hours of vomit-inducing and then stomach stabalization, we were lucky enough to be sent home free and clear with some meds to coat his system and prevent any damage from any reminants that might be left in there. Most of the dogs I read about in my google search weren't that lucky. Had there have been more in that bottle, or if I had just waited for symptoms before taking him in, our outcome may not have been so good. .

Lessons learned: Keep medication and potential hazzards hidden and out of reach (this goes for pets and children alike!). Dogs are scavengers by nature, and even the best trained dogs are still dogs. .

Read up on the medication your dog is taking and know what the potential dangers are. I thought I had, but I had missed that extremely important fact that Rimadyl is flavored with a taste dogs love and commonly lands dogs in the veterinary ER for exactly that reason. .

In the event of an emergency trust your gut feeling and call your vet or emergency vet ASAP (ACCES has lovely refrigerator magnets that are literally a life saver). Allowing time to pass waiting for your dog to show symptoms before acting can lead to irrevocable outcomes. Remember: you can't see what's happening inside your dog. Once you notice symptoms the damage has often already been done. .

If your vet tells you you need to get in NOW, listen to them and do it! They do this for a living and have seen it all countless times. Potential situations caught early are more treatable and often less of a blow to your finances if you get into the vet office the moment you notice something isn't right.