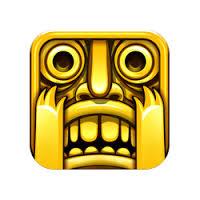 I recently got hooked playing a video game on my tablet and discovered some interesting side effects during gameplay that I wasn’t expecting. For full disclosure I should clarify that I’m not in the habit of playing fast paced action games, generally I prefer the much slower word or number games. I think in a way my lack of experience playing this type of game made me hyper aware of certain physiological changes that began occurring and my inability to control these changes even as I recognized that they were happening.

The game is Temple Run and the goal is to run along a path at high speed dodging obstacles by jumping, sliding or outrunning them while simultaneously trying to grab various rewards that will increase your chances of adding distance. Also coins can be snagged in hopes of obtaining a gold Idol. At first I was so busy trying not to get killed by a monster or falling off a cliff that jumping up and obtaining an extra life gem was out the question. Eventually I became adapt enough at the basics that obtaining the gems became a goal and that is when I began to notice each and every time I jumped to grab a gem my stomach would clench and I got a little adrenal rush which felt a little like a like a queasy belly. Hmmm … that’s interesting. Then I started to notice that the sight of a gem in the near distance began to have the same effect and that if I played the game before trying to sleep I was slightly uneasy and had a difficult time settling down. Okay, I thought, let’s see if I can practice a little bio feedback to try and eliminate that response, because strange as it sounds it was starting to make me a little uncomfortable about playing the game. When that didn’t work, I tried breathing exercises and talking to myself to self-sooth, but no matter what I told myself my mind was incapable of stopping the physiological response. My solution to this was playing the game for ten minutes. This allows me to stop before the stacking of each of these responses begins to take its toll on my body as well as my mind. I’m still having the response to the game but my bounce back time - the time it takes for me to feel “normal” again - is within acceptable limits for me. Interesting to note here that when I contracted the flu and took an over the counter flu medication it interrupted that response and I posted the highest scores I had ever obtained in the game.

I started to think about my dogs and their triggers (those things in the environment that cause their bodies to release stress chemicals or to respond in some way) and now understand how truly tiny the event might be and yet effect a major change in the body and mind. With my experience I was able to abstract and reason about what was occurring and why. I can’t imagine how scary it would be to have this response happen “out of the blue”, and while I was able to separate the environment from the physical object that was the source of the event, my dogs cannot. This experience has made me much more patient with my dogs and also has me paying closer attention to their body language, especially in new or changing environments.