When Size does matter 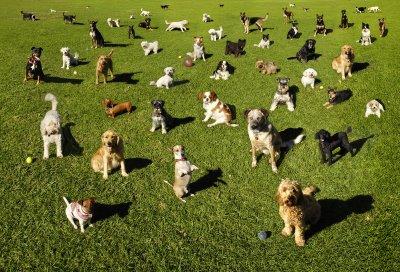 Look at the size differences

When it comes to play size does count, especially if you have a puppy or dog that enjoys a good game of "catch me if you can." If the participants of the game have a weight difference of fifty percent or greater, chase games need to interrupted immediately -- or better yet, be proactive and never allow them to begin in the first place. Even during non-chase games dogs and puppies need to be carefully supervised if there is significant difference in their sizes.

What starts out as a fun game can quickly become a serious issue called "predatory drift." Predatory drift is when a social interaction slips and changes into a predator - prey interaction. Imagine a small dog running and having that movement attract the attention of a couple of larger dogs who begin to give chase. The larger dogs are simply attracted to the movement of the smaller dog retreating, but the small dog panics at the sight of two dogs rapidly approaching and lets out a startled vocalization. The small dog is suddenly acting like a prey animal which can trigger the predator reflex in the larger dogs. Now that the dog is prey the result can be serious damage and even death. Acquired Bite Inhibition fails during food acquisition and the bite a dog uses during a prey drift interaction is often a grab and shake, a much different bite than a dog inflicts during a dog on dog fight.

We love our dogs but we need to remember that dogs are descended from the Gray Wolf, a highly evolved and capable predator, and most dogs have inherited some of its innate predatory tendencies and instincts. Most of the time you will see those tendencies harmlessly expressed in a rousing game of fetch or squirrel hunting but sometimes they can be directed at other dogs. Since Gray Wolves are about the same size and tend to live in stable social groups there is little chance of serious injury occurring during their chase games, but in the intervention and selective breeding programs that have led to our dogs, we have created one the most diverse species on earth with an enormous variety of form and size.

Always play it safe and supervise, because size really does matter.