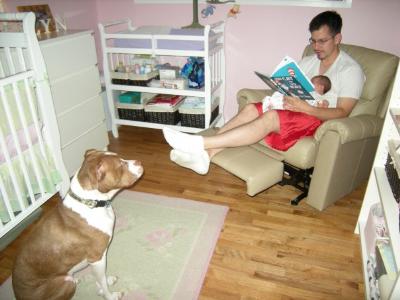 Making every interaction between dogs and children a positive one is the best advice I have ever received about integrating children into a dogs-only-household. Dogs learn by repetition and association. If good things continually happen when the baby is around, the dogs will learn to associate good things with him or her. Thus, reducing the chance of any fear, jealousy, or anxiety they may have with the new addition.

Being a first time mom, I took that advice to heart when my daughter, Kate, was born. Our dogs, Nala and Titus, have been members of our family since we adopted them at ten and eight weeks old. My husband, Jason, and I knew that we would have children one day, so we underwent training classes very early on (from Linda!) and slowly prepared them for life with children well before we tried to get pregnant. Having the dogs well trained and well adjusted to our lifestyle made it much easier to bring a baby into our familial mix. We did (and still do) have our share of challenges, but overcoming those challenges have been a little easier thanks to three words: KEEP IT POSITIVE!

It’s important to exercise caution with dogs around a new baby. They may be beloved members of the family, but they’re animals first! However, I don’t agree with keeping babies and dogs isolated from each other unless there’s a serious behavioral issue with the dogs. That should be addressed well before the baby arrives in the first place. Isolating the dogs from the baby means isolating the dogs from Mom and Dad, since most of Mom and Dad’s time will be spent with the baby. That’s not a positive experience for them as it means being kept from their human. As a result, they form a negative association with the baby.

To make the transition positive for Nala and Titus, we incorporated them into almost everything we did with Kate. Dogs are creatures of habit and it’s wise to keep their daily lives predictable. They thrive on stability. However, babies and predictability don’t go together at first. We kept their mealtimes and walks as close to the same routine as before, but there was no getting around the fact that the dogs had to make room for this new person in our lives who demanded much of our attention. Therefore, nursing times were spent with Nala and Titus nestled at my feet. When it was time to put the baby to sleep, they sat and listened to bedtime stories. If we did need to separate them from her, they were gated in another room with one of us, or with a stuffed Kong or bully stick. In turn, we found ways to incorporate the baby into the dogs’ routine. Kate and I would sometimes tag along on their walks with Dad; and while they played fetch outside, Kate and I watched. When she was a few months old and had learned to grasp objects in her hands, I included her in our training sessions by giving her large dog treats to hold onto. Then I would wrap my hand around hers and give the dogs their treats. It was as if they were getting treats from her. Having the dogs and the baby constantly around each other helped the dogs become used to their new family member. For the baby, she was just as familiar and comfortable with the dogs as she was with any human member of the family.

When Kate started learning to self-feed, one piece of food would end up in her mouth while ten would fall onto the floor. This was the stage the dogs loved the most! As she got better at it, less food would fall. Nala and Titus resorted to each sitting on one side of her high chair (a.k.a. begging). Somehow, either through our dogs’ ability to manipulate a baby into giving them food or by Kate catching a glimpse of us giving them food, she started feeding the dogs from her high chair. As first time parents, it was great to see our daughter bonding with our dogs in their own way, independent of us facilitating any sort of interaction. Of course, to practice proper eating hygiene and to prevent any resource guarding, we monitored that sort of bonding and kept it to a minimum!

As Kate got older and more mobile, she started developing her own unique personality and became more curious of the world around her. That’s when life at home became challenging. The phrase, “Make it positive,” didn’t seem possible. One afternoon, my husband came home from grocery shopping and left a bag on the floor. A bag full of canned goods on the kitchen floor wasn’t just a bag of groceries anymore. It became a bag full of ammunition. Nala and Titus became the moving targets. They sought refuge from me while my husband tried to make our toddler understand that throwing stuff at the dogs was unacceptable. However, as many parents know, making a one year old understand right and wrong isn’t so easy at first. It was obvious that Kate loved the dogs. If they weren’t present at bedtime for stories, all heck would break loose. She loved interacting with them and they loved interacting with her too; as long as cans weren’t being catapulted their way. It was just a matter of us finding more positive ways to direct her energy and enthusiasm towards them.

One afternoon, Kate and I were sharing some snacks in our living room. Suddenly, Jason let the dogs inside after their play session in the backyard. Titus, our forever puppy with the worst food manners, bounced over and stuck his nose in Kate’s hand – it still comes as a surprise sometimes that he passed the Canine Good Citizen test on the first try! Nala, the world’s most polite begger, sat right down in front of us with her typical “I’m being good so give me a treat” stance. Yes, she has us well trained! We taught both dogs bite inhibition as puppies as well as taking treats gently, so we were never concerned with them being too rough when taking things from Kate. However, we didn’t want the dogs to think it was okay to grab food or toys from her either. First, we didn’t want her to get fearful of them. Second, we didn’t want it to turn into a game of Kate running around with food or a toy, and Titus chasing her to get the prized item. And third, we wanted to make every interaction between them a positive one. Kate yelling, “No, no, no!” at Titus wasn’t such a great interaction for either of them. That’s when I decided to teach Kate some basic dog training commands. One, she needed to learn another positive way to interact with them. And two, the dogs needed to know that if they wanted something from her, they had to work for it. Thus began Kate’s introduction into the world of dog training.

The first command we taught her was “Sit.” It was easy for a toddler to say and easy for the dogs to understand. At first, they would sit upon hearing me say, “Tell Nala and Titus to sit.” Eventually, she would say it without our direction and the dogs learned to follow her cue. One afternoon, Kate came into the kitchen and pointed to a box of dog treats on the counter.

“Give Lala treats,” she said. (She still can’t quite pronounce the N in Nala’s name.) “You want to give Nala treats?” her dad replied. “Yeah,” she answered as Jason gave her a handful of dog cookies. “Sit, Lala,” she said. And Nala sat! Kate was quite proud of herself and Nala was quite full after a series of “Sits” and “Downs.” Click and treat for Mom and Dad!

Since then, Kate has turned two and has become quite the little sponge, repeating every dog command she hears. She even turns around and ignores the dogs whenever they give her unwanted attention! That’s lesson #1 of getting your dogs not to jump on you – a concept that several of our adult relatives still haven’t grasped! Thus far, she has mastered saying, “Sit,” “Down,” “Drop it,” and “Go to crate/outside/inside;” and is now working on “Leave it!” And how do the dogs react? As if Jason or I were giving those commands. They don’t always listen to her at first, but they don’t always listen to us on the first try either!

Of all the information I’ve read and received from various dog trainers on integrating dogs and children, “Keep it positive” has surely helped us transition from a dogs-only-household to one with dogs and kids. Sure, we make mistakes no matter how careful we are. But repetition trumps all and dogs are more likely to be better adjusted when they have a hundred positive experiences over the two or three not so positive ones.

So for the expectant parents out there, remember to make it a habit to keep it positive!