A Touch of Understanding 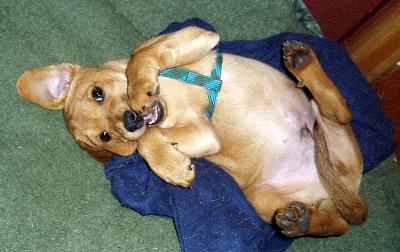 Who wouldn't fall for Koji?

On December 19, 2010, I adopted a 7-week old puppy that I named Koji. His wrinkled brow, puppy-breath, and sweet blue eyes melted my heart instantly. Puppies tend to do that to us. But Koji was different than the puppies most of us are likely to bring into our homes and lives. He was feral.

Koji had been rescued from the streets of Taiwan by Animal Rescue Team Taiwan (ARTT) when he was about four weeks old. Although his eyes were barely opened when the rescuers gently placed him and his littermates into an empty cardboard box, Koji had already absorbed important cues about the world around him. These impressions could have been passed to him from his mother, a young street dog under the constant stress of fending for herself while feeding and protecting her litter.

Thanks to ARTT and their sister rescue groups in the United States, some of these dogs are being saved from a harsh life there. But being rescued and placed into loving homes does not change the fact that they had already learned to survive on their own. To these street dogs, humans were as likely to be a source of danger as to be a source comfort.

This is acknowledged by the rescue groups, which advise potential adopters that these Taiwan street dogs are likely to be very shy. When I brought Koji home from Seatac airport that first night, I quickly learned the implications of this advice. Even at 7-weeks old, Koji was acting determined to make it on his own. He was wary of everything about me, including any food or attention I offered.

My efforts to interact with him over the following days and weeks continuously fell short. He remained detached and defensive. His instincts seemed to drive him away from the company of humans; from what I could tell, he preferred to be left alone to scavenge in the yard and exercise his innate survival skills. He also began to growl at me when I reached for him or attempted to pick him up.

I was becoming desperate to find a way to connect with Koji.

Recognizing that I needed help handling the special challenges he presented, I contacted trainer Linda McVay of University Canine Learning Academy in Seattle, who had experience working with rescued Taiwan dogs.

Linda listened to my concerns and provided knowledgeable insights about how Koji's behavior might be strongly influenced by his feral background, even though he was rescued so young. She explained the importance of not reinforcing his fear and cautioned that lifelong, proper socialization was especially critical for a dog like this.

Speaking with Linda that day was a watershed moment for me. Up to that point, I had not grasped the significance of the differences I had observed in Koji as compared to other puppies I have raised. I was expecting him to be just like any other dog. Understanding that he was different--and why-- put my concerns into perspective and gave me a sense of direction for working with him.

To that end, my first priority was to ensure that every experience Koji had with a person was nothing short of fabulous--treats and praise should accompany every introduction and new experience. Even my own interactions with him were to be coupled with all things positive so that he would learn to associate human contact with good outcomes for him (classical conditioning).

Linda also suggested that I teach Koji to "touch”, where he taps his nose to an object or outstretched, open hand in exchange for a reward. Koji quickly learned this wonderfully simple trick, which, unbeknownst to me, had the power to transform my entire relationship with him.

By asking Koji to "touch" as I walked, I could easily lead him to his crate or outside to potty. I could see that he gained confidence by being rewarded for his choice to follow my hand. He was learning what was expected of him and responding to me. We were connecting!

Most importantly, once we began using "touch,” I rarely needed to pick him up, so I was no longer handling him in what he perceived to be a threatening manner. He responded to this new dynamic by letting his guard down enough for us to build a rapport through continued training and socialization.

After working with Koji for four months, his bright, charming personality has blossomed. We continue to bond through daily training and positive-reinforcement exercises like games of tug which include lots of tummy rubs and snuggles while we play. When I ask him for a "kiss," he happily touches his nose to my cheek.

We have come a long way since that first "touch."