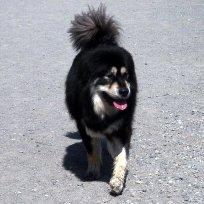 So you’ve allowed your dog the time to make a choice: do as requested or not. But what happens if he doesn’t do it?

You’ve asked him to sit before walking out the door for a walk, but he fails to do so. If 20 seconds go by and he’s still standing there, you might square up to him. This is a body prompt, which is a big old hint. But be sure to give him that time. 20 seconds can really feel like forever! If Rover still doesn’t sit even after you’ve squared up to him, you have to ask yourself: Does my dog really know this behavior?

There is a chance that he might not “know” Sit quite as well as you’d thought, at least in that context. Have you done it by the front door or when Rover was a little excited? Are there other people at home that are normally not there when Rover is easily offering you the right behavior? Is there someone right outside? If indeed the context is different and he has never worked with that level of distraction before, it is acceptable to give him a bigger hint: the visual cue.

However, if the answer is “Yes, Rover readily offers me this behavior in the same context the majority of the time,” then let’s face it: You just got blown off. This is when the use of a “No Reward Marker” is appropriate. In the UCLA Dogs studio, Linda and I use a few:

All said in a very conversational tone. You’re not angry or upset or trying to punish him. You are just letting Rover know that this is not, in fact, what you were looking for and he has just lost his opportunity to win reward. In most cases Rover will now offer the sit – Oops, you mean you were serious?

But maybe he still doesn’t do it. If he is already on leash, you might just wait him out indefinitely, holding your lead in “lock down” position (with which most of our students are familiar). It’s loose and long but you’re not going anywhere. It could take a while, so be patient – you are now blowing Rover off. Don’t speak to him or even look at him. It’s not a contest: you’re in no rush. If Rover wants out he’ll eventually do as requested.

The other option is to just walk away, dropping the leash if you have to. Get involved in something else for 30 seconds to a minute. Then try again, using the original cue. A dog motivated to get what you have will try to figure out how to get it.

Dog training is a science, but it does take certain finesse as well. You must know your dog, know what motivates him and be patient. At this stage of training you are showing your dog that yes, indeed, you do really mean it when you ask for a behavior. If Rover would like to win access to food, toys, attention or outdoors he really does need to pay attention to you. It is your role to teach him and make the rules clear. Train the behavior and proof it in a variety of settings and levels of distraction. Be consistent. Be patient. No dog ever intentionally denied himself something he truly wanted just to make his human angry. If your dog continually fails take an honest, objective look at your level of training. We can’t read dogs’ minds. We can’t even read human minds and we’re the same species! The only way to be in a position to say your dog “knows” something is if he does what you ask consistently in most settings.

The other area to examine is your dog’s motivators. By this stage you should be familiar with what they are and how to use them. However do recognize that they can change from day to day. I love Thai food, but there are days when I’m just not into it and would prefer some fresh tortilla chips and pico de gallo. Dogs are no different (well, except that most don’t like pico de gallo. I wouldn’t test that, however.) It’s also okay to withold reward from your dog if he doesn’t comply. If he’s pottied and you have the opportunity to exercise him later in the day or in some other way (Tug or Lure, anyone?), perhaps he just really doesn’t need a walk right now. Rover blew it! Oh well.

Remember, you do control all those things your dog wants and needs: food, water, cushy sleeping areas, access to fun things and most of all, your attention. Use it to your advantage! Don’t cave because it’s easier. Patience pays off.