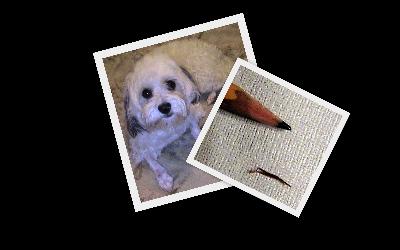 In the August newsletter entitled "Lovely but Dangerous," I spoke about the possible injuries that could occur if your dog came into contact with a type of commonly occurring "wild barley" called Foxtail. Since that article appeared, five of our clients have reported that indeed their dogs have had to visit a veterinarian and in two of those five cases have undergone surgery. One of the two dogs has undergone multiple surgeries on its eye. John and Teresa Holm have kindly agreed to share their story. It is important to note that their saga began in July, and as of September 16th Wellington is still wearing his cone.

This past July, John and I went on a road trip with Wellington, our Havanese. We had been on the road several weeks and were at my parent's farm in Kentucky. I suspect that this is where Wellington picked up a grass seed that worked its way into his paw. About a week later, we were in Illinois visiting John's Mom when I first noticed that Wellington was licking his right paw a lot and chewing on it a bit. I really didn't give it much notice until he ran after a cat in my mother-in-law's house. We heard a clatter, clatter, crash from the kitchen. Wellington yelped and limped back into the room with us. I suspect he slid into the wall in his enthusiasm to play with the kitty and disturbed an unseen pocket of infection between his toes.

Luckily, John's sister-in-law is a veterinarian. We assumed it was all taken care of after Trish flushed his foot, probed around for what she assumed was a grass seed and, finding nothing, hoped that his body had absorbed it. She put him on antibiotics.

A couple of weeks later, he was limping again but this time the problem -- an abscess -- was farther up on his foot. We went to Hawthorn Hills Veterinary Hospital. It was our first experience with them, and I cannot express how pleased I have been with their service. Dr. Stacy Davison flushed it again, squeezed and probed but could find nothing. He got more antibiotics and pain pills.

We were introduced to the cone of shame. He figured out how to fold the cone and lick his foot anyway. The problem continued, so it was surgery to remove the skin on the top of his foot and get whatever was in there out. (While we were at it, they cleaned his teeth and trimmed his nails.) But they couldn't find anything, and were digging around pretty close to the tendons, so they flushed it and stitched him up.

He never did much limping, and it is impossible to keep him still. What a happy guy. The problem was still there, and I didn't like that he had been on antibiotics for so long. In addition to the cone, we tried duct taping a baby sock over his foot. This actually worked pretty well until the doctor manipulated his foot, bringing up puss. This made the foot unhappy, and after that, Wellington started pulling the socks off and eating them. Well, really only half of one sock.

There were several visits to check the progress, remove stitches, etc. He has become so accustomed to the doctor's office that he moaned a bit when we park. Drama queen, he loves everyone there. He just wishes they would stop hurting his foot. The foot was still swollen and unhappy, so they put him out again. This time they injected an x-rayable dye so they could follow the path that the grass seed had taken. Dr. Davison was impressed with the dye because she didn't expect the grass seed to be where she found it. It had traveled an impressive distance. Even with the dye to show the seed head's path, she almost did not find it. These seeds can obviously be very tricky to get at. This time, she not only cut the top of his foot but also entered from the bottom and put a drain in for a few days.

I had her shave all of his feet so that I could compare a healthy shaved foot with a swollen shaved foot. Neither is much to look at in my opinion. I had the back ones shaved because I wanted to limit the chance of another seed in a foot this year. So far, things are looking much better: no more infection and the incisions seem to be healing well. The stitches come out within the week.